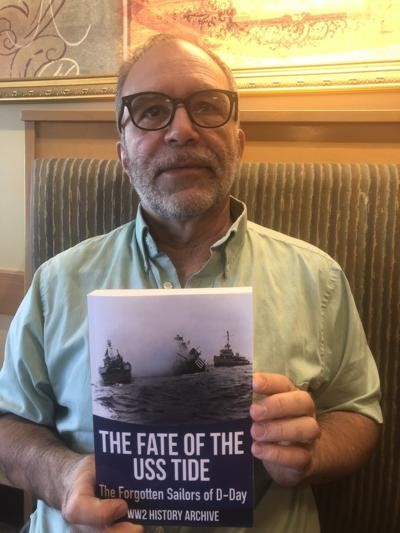 Author Mark Zangara holds a copy of his book “The Fate of the USS Tide.”

HARPERS FERRY — Local author Mark Zangara is on a mission to keep the history of World War II alive. Through interviews and research, Zangara and the other volunteers of his nonprofit, WW2 History Archive, travel across the country — and the world — interviewing World War II veterans from the allied forces.

“These guys made tremendous sacrifices; some of them are disabled. Their families made sacrifices, and especially the ones that never came back. I don’t know that people realize that,” Zangara said.

In his latest book, “The Fate of the USS Tide, the Forgotten Sailors of D-Day,” Zangara brings to life the little-known story of the USS Tide, a U.S. Navy minesweeper that supported the Normandy beach landings on D-Day. The vessel hit a Nazi mine in the English Channel on June 7, 1944.

Zangara interviewed many of the surviving crew members during a reunion the sailors were attending. He found the survivors willing to talk, and Zangara stayed in touch with many of them and continued to dig into the story. His new book is a result of the interviews and his extensive research.

“I got from the interviews exactly what it was like when the ship hit the mine, said Zangara. “It was unbelievable. Other ships nearby saw (the USS Tide) go right up in the air.”

Although Zangara used service records and the ship’s log, much of the time during the incident the ship was deployed under classified orders, and the records of the ship’s movements and activities were sparse. Because of this, Zangara is reliant on his interviews for much of the detail regarding the actual explosion. This is just one reason why he feels interviewing World War II survivors about their individual experiences is so vital in understanding the war.

While the book is focused on service members, Zangara also wants to preserve the history of civilians who were involved in the war effort or suffered during the war. According to Zangara, these histories are part of the complete story of the war. He plans on releasing a book dedicated to telling stories from the home front later this year.

The main thing Zangara hopes people take away from his work is the intense amount of patriotism people felt during World War II.

“A lot of us are really concerned that patriotism is not even one percent of anyone’s life anymore,” he said. “It’s more important than, money or anything else.”